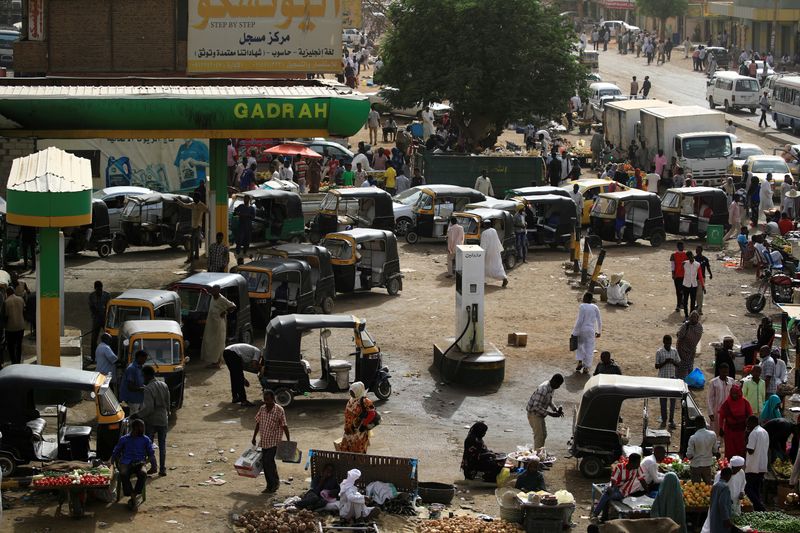 © Reuters. FILE PHOTO: Vehicles line up for gasoline at a gas station in Khartoum

The change is a key reform demanded by foreign donors and the International Monetary Fund (IMF), but was delayed for months as shortages of basic goods and rapid inflation complicated a fragile political transition.

The central bank set the indicative rate at 375 pounds to the dollar, several commercial banking sources said, from a previous official rate of 55 pounds. Recently, the dollar traded at between 350 and 400 Sudanese pounds on the black market.

The central bank will set a daily indicative rate in a “flexible managed float”, a circular sent to banks said. Banks and exchange bureaus are required to trade within 5% above or below that rate.

The circular also set a profit margin between buy and sell prices of no more than 0.5%. Authorities would not control the rate, the central bank governor told reporters, though Finance Minister Jibril Ibrahim said unspecified foreign funds were on their way to Sudan and the central bank could intervene if needed.

“The decision is not a float, but a policy of flexible management,” said central bank Governor Mohamed al-Fatih Zainelabidine.

Steps had been taken to streamline imports of strategic commodities and limit imports of non-essential goods ahead of the devaluation, officials said.

Ibrahim said Sudan’s customs exchange rate was not included in the devaluation and its reform was still under study.

Sunday’s move had been expected late last year under an IMF staff monitoring programme that could lead to relief on Sudan’s estimated $60 billion in foreign debt, but was held up by political uncertainty.

As well as paving the way for debt relief, the devaluation would help stabilise the currency, reduce smuggling and speculation, and attract remittances from Sudanese working overseas, the central bank said in a statement.

It comes less than two weeks after Prime Minister Abdalla Hamdok appointed a new government to add rebel group leaders who signed a peace deal in October, including Ibrahim.

Hamdok is serving under a joint military-civilian council that took power after the overthrow of veteran autocrat Omar al-Bashir in April 2019.

The success of the transition is seen as crucial to stability in a volatile region, as Sudan emerges from decades of international isolation.

Last year the government lifted most fuel subsidies, meeting another key demand from lenders, and the United States removed Sudan from its state sponsors of terrorism list as its leaders agreed to take steps towards normalising relations with Israel.

However, an economic crisis that triggered mass protests against Bashir has continued, marked by shortages of fuel, bread and electricity. Annual inflation has accelerated to more than 300%, one of the world’s highest rates.

A donor-funded family support programme meant to soften the blow of subsidy cuts was delayed due to the exchange rate gap, though Zainelabidine said funds to be spent at the new rate would be disbursed to the finance ministry from Monday.

Some economists said they expected the impact of devaluation on inflation to be limited because almost all transactions were already being carried out at the black market rate.

0
A woman waiting on a kidney transplant has said an 'opt-out' system for organ donation would chan...
Read more

0
Visitor restrictions at some maternity hospitals across the country have been labelled 'barbaric'...
Read more

Shane Duffy leaves Celtic after "tough year" on and...

0
Ireland defender Shane Duffy has thanked Celtic for their support through a "tough year on and off the field".
Read more

0
Sam Bennett's remarkable 2021 continued on Friday with his victory on stage 3 of the Volta ao Algarve. It was his seventh win of the year.
Read more

Did You Get My Slack/Email/Text?

0
We are in the midst of a major transition from remote to hybrid work. As this shift is happening, it’s essential for managers to establish norms around digital communication with their teams. Having a detailed guide will help ensure that everyone on your team is on the same page and has the same expectations —…
Read more
News

The Hottest Trends in ETFs This Year

0
Need help? Contact us We've detected unusual activity from your computer network To continue, please click the box below to let us know you're not a robot. Why did this happen? Please make sure your browser supports JavaScript and cookies and that you are not blocking them from loading. For more information you can review…
Read more