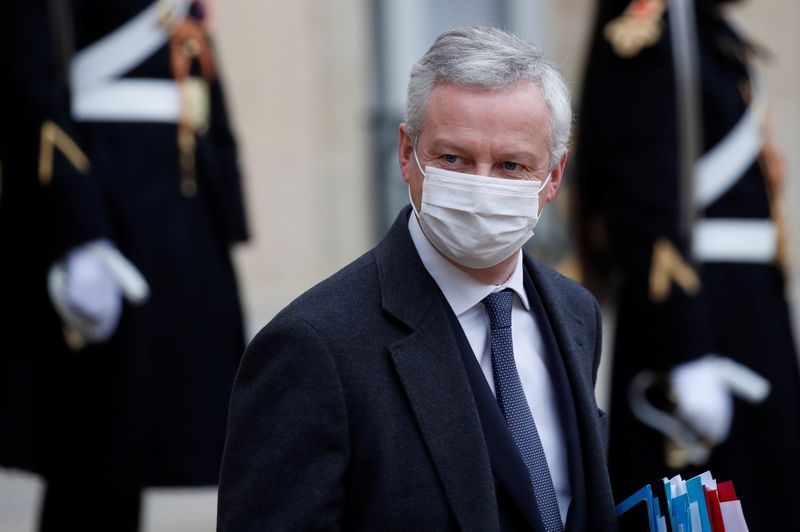 © Reuters. The weekly cabinet meeting at the Elysee Palace in Paris

Paris and Washington clashed during the Trump administration over France’s tax on digital service companies and over reluctance from Yellen’s predecessor Steven Mnuchin to move forward on talks to overhaul the rules for taxing cross-border commerce.

“The Secretary committed to re-engage actively in the ongoing OECD discussions on international taxation to forge a timely international accord,” the U.S. Treasury said in a statement issued after the first call between Yellen and Le Maire since she took office on Tuesday.

France’s Finance Ministry said the two “agreed on the need to find multilateral solutions to many of the issues facing the global economy, including addressing the tax challenges of efficiently and equitably taxing the income of multinational firms.”

Nearly 140 countries have agreed to rewrite, by mid 2021, the rules about how companies are taxed outside their home countries to take into account the rise of big digital companies like Google (NASDAQ:), Amazon (NASDAQ:), and Facebook (NASDAQ:).

Le Maire and Yellen also spoke about the need to reduce trade tensions between Europe and the United States, which flared during the Trump administration.

The French minister in particular raised the topic of U.S. trade sanctions on French wine growers that the Trump administration had put in place over a long-running aircraft subsidies dispute.

Spread the love
Previous articleU.S. will re-engage in OECD tax talks, Yellen tells French counterpart
Next articleHigh Stakes as India Vows to Unveil a Budget Like ‘Never Before’

Azmin: Malaysia attracted new investments worth RM16.52b from the...

0
KUALA LUMPUR, May 21 ― Malaysia has managed to attract new investments worth RM16.52 billion from the United States ...
Read more

0
Doja Cat announced Friday on social media that she will no longer perform at festivals or open for The Weeknd on his tour this summer because of tonsil surgery...
Read more

0
Anna Sorokin, the convicted scammer who pretended to be an heiress named Anna Delvey, has unveiled a pop-up show of her prison drawings made while in the custody of U.S. Immigration and Customs Enforcement...
Read more

PGA Championship: Will Zalatoris leads after Round 2; Tiger...

0
Will Zalatoris took a one-shot lead over Mito Pereira of Chile after Friday's second round of the 2022 PGA Championship at Southern Hills Country Club in Tulsa, Okla...
Read more

The Weekly Fix: Fears of Recession Are Reshaping the Bond Market

Cracks in US Economy Start to Show as Recession Warnings Mount

0
Need help? Contact us We've detected unusual activity from your computer network To continue, please click the box below to let us know you're not a robot. Why did this happen? Please make sure your browser supports JavaScript and cookies and that you are not blocking them from loading. For more information you can review…
Read more