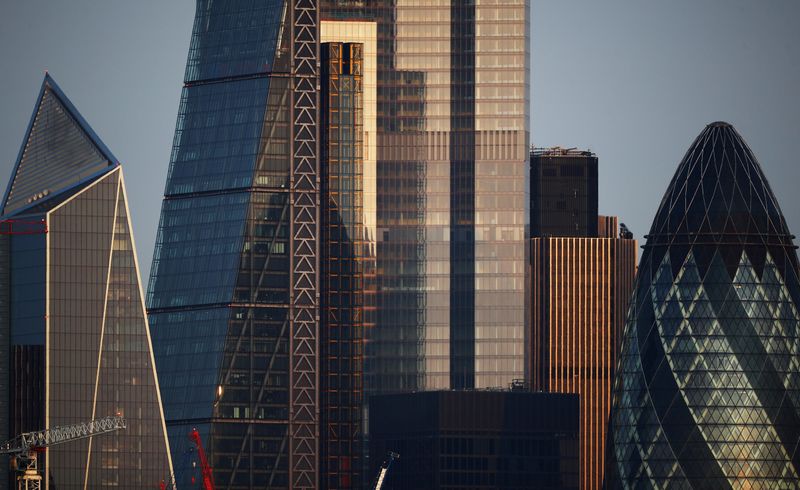 © Reuters. FILE PHOTO: Skyscrapers in The City of London financial district are seen in London

LONDON (Reuters) – Britain on Sunday downplayed the risk of the European Union taking business away from the City of London after Brexit, saying the real challenges come from New York, Tokyo and other areas.

Britain completed its exit from the EU at the end of 2020, but the last-minute free trade deal that replaced membership of the bloc did not include arrangements for free trade in financial services – the engine of Britain’s economy.

“If we’re really honest about it, the challenge to London as the global financial centre around the world will come from Tokyo, New York, and other areas, rather than from those European hubs, particularly if they start to erect barriers to trade and investment,” foreign minister Dominic Raab told the BBC.

Britain has yet to be granted the equivalence status on financial services regulation that would free up trade, because the EU says it needs information about Britain’s intentions to diverge from EU rules. Britain says it has supplied all the necessary paperwork.

Raab said the EU risked undermining its own competitiveness if it put up barriers in order to “nick a bit of business here and there from the City”.

EU authorities have previously been clear that it wants euro-denominated financial activity shifted from London to build up its own capital market under direct Brussels supervision.

Spread the love
Previous articleIMF wants more reforms for Ukraine to get next part of loan
Next articletag:reuters.com,2021:newsml_LYNXMPEH1D0G3

0
Former Soviet leader Mikhail Gorbachev on Saturday urged Russia’s Vladimir Putin and new US President Joe Biden to push for deeper restrictions on nuclear weapons.Tensions soared between the two nations under previous US leader Donald Trump, fuelled by allegations of sweeping cyberattacks and a litany of other disagreements.But soon after Biden took office, the two…
Read more

0
A group of opposition activists in Hong Kong who organised a primary election said to have breached the national security law by attempting to overthrow the government disbanded on Saturday.The announcement came a day before 52 former opposition lawmakers and activists were expected to report to police over their arrests on subversion charges relating to…
Read more

0
A Chinese state laboratory has detected two more-transmissible mutations of the African swine fever virus, a disease that has devastated pig herds across the country in recent years.In a paper published on Friday, researchers at the Chinese Academy of Agricultural Science’s Harbin Veterinary Research Institute said they carried out genetic analysis of various natural mutations…
Read more

South China Sea: how the US Navy aims to...

0
The US military aims to use troops on the ground to help multinational fleets more accurately guide missiles over longer ranges, an approach that analysts say could be used in the South China Sea.In a drill in early February, the USS Dwight D. Eisenhower aircraft carrier strike group sent US Navy Seal teams as well…
Read more

0
No results matched your search Economy3 hours ago (Feb 27, 2021 10:26AM ET) 5/5 © Reuters. Tunisian Islamist party rally in capital 2/5 By Tarek Amara TUNIS (Reuters) - Tunisia's biggest political party assembled an immense crowd of supporters in the capital on Saturday in a show of strength that could fuel a dispute between…
Read more
News

Donald Trump’s niece blasts his ‘chutzpah’ toward her fraud lawsuit

0
By Jonathan Stempel NEW YORK (Reuters) - Donald Trump's niece accused him on Friday of trying to dodge accountability for defrauding her out of a multimillion dollar inheritance by claiming she took too long to sue. Lawyers for Mary Trump made the accusation in a New York state court in Manhattan, where the 55-year-old psychologist…
Read more
News

0
No results matched your search Economy18 hours ago (Feb 26, 2021 07:45PM ET) © Reuters. FILE PHOTO: The IMF logo is seen outside the headquarters building in Washington By Andrea Shalal WASHINGTON (Reuters) - The International Monetary Fund on Friday said it would propose ways to improve the transparency and accountability of how its Special…
Read more