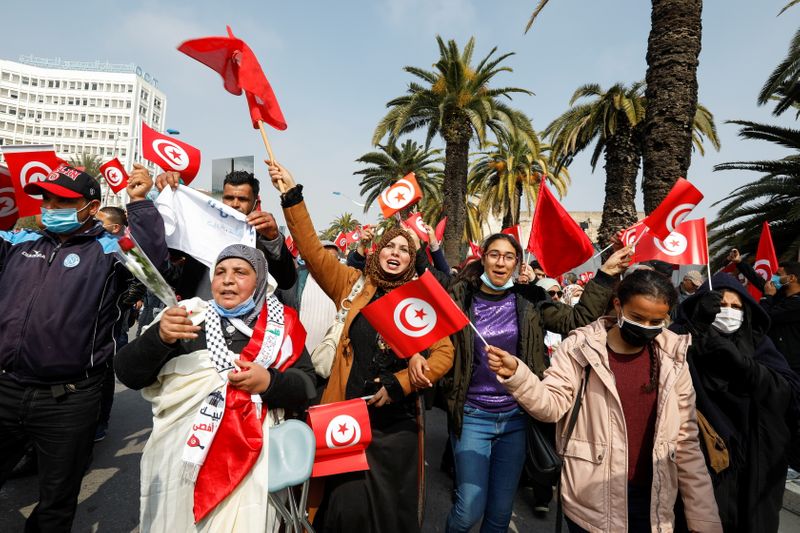 TUNIS (Reuters) – Tunisia’s biggest political party assembled an immense crowd of supporters in the capital on Saturday in a show of strength that could fuel a dispute between the president and the prime minister.

In one of the biggest demonstrations since Tunisia’s 2011 revolution, tens of thousands of Ennahda supporters marched through central Tunis chanting “The people want to protect institutions!” and “The people want national unity!”.

The dispute has played out against a grim backdrop of economic anxiety, disillusionment with democracy and competing reform demands from foreign lenders and the UGTT, the powerful main labour union, as debt repayments loom.

Banned before the revolution, it has been a member of most governing coalitions since then and, although its share of the vote has fallen in recent years, it still holds the most seats in parliament.

“Nationalists, Islamists, democrats and communists,” Ghannouchi told the crowd, “we were gathered together during the dictatorship … and we must unite again.”

The most recent election, in 2019, delivered a fragmented parliament while propelling Saied, an independent, to the presidency.

When the government collapsed after only five months in office, Saied nominated Mechichi as prime minister.

But they soon fell out, and Mechichi turned for support to the two biggest parties – Ennahda and jailed media mogul Nabil Karoui’s Heart of Tunisia.

Last month, Mechichi changed 11 ministers in a reshuffle seen as replacing Saied’s allies with those of Ennahda and Heart of Tunisia. The president has refused to swear four of them in, however.

Meanwhile, demonstrators protesting last month against inequality and police abuses focused most of their anger on Mechichi and Ennahda.

Ennahda billed Saturday’s march as “in support of democracy”, but it was widely seen as an effort to mobilise popular opposition to Saied – raising the spectre of competing protest movements.

“This is a strong message that all the people want dialogue and national unity,” Fethi Ayadi, a senior Ennahda official, told Reuters.

To add to the tensions, demands by foreign lenders for spending cuts, which could lead to unpopular reductions in state programmes, are opposed by the UGTT.

But Tunisia’s credit rating has fallen since the coronavirus pandemic began, and market concerns about its ability to raise funds are reflected in sharp price rises for Tunisian credit default swaps – insurance against default on its debt. ($1 = 2.7 Tunisian dinars)

Biden tests ties with China, Russia with sanctions and...

0
When China’s premier football competition, the Chinese Super League (CSL), kicks off on April 20 many things will be different on and off the pitch, notwithstanding the changed league format in which games will be played in two bio-secure ‘bubbles’ in Suzhou and Guangzhou due to the ongoing pandemic. Read: The Money-losing Game: Keeping Investors…
Read more

0
Topline The global death toll from the coronavirus soared past 3 million people Saturday, according to data compiled by Johns Hopkins University, with cases still surging in many parts of the planet, as nations throughout the world attempt to vaccinate as much of the population as possible. Aerial view of the graves of COVID-19 victims…
Read more