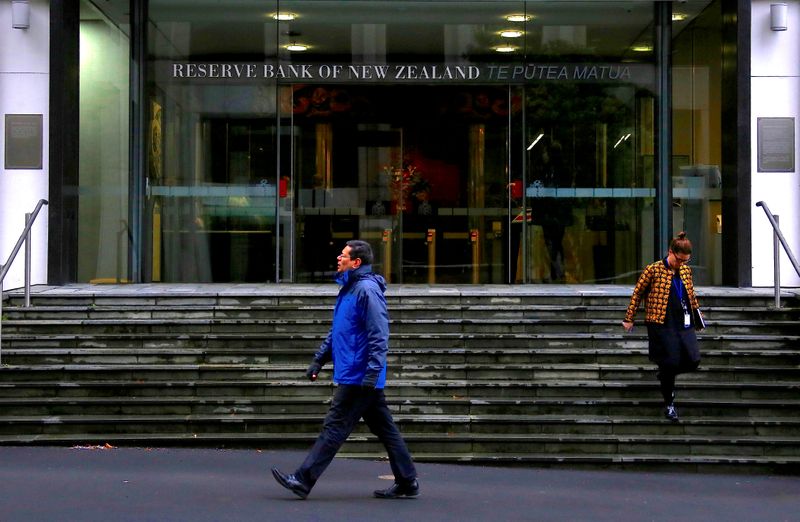 WELLINGTON (Reuters) -New Zealand’s central bank on Wednesday announced a halt to its pandemic-induced quantitative easing programme, sending the dollar soaring as markets bet that a rate hike was now imminent this year.

The Reserve Bank of New Zealand (RBNZ) kept its official cash rate at 0.25% but cut short a NZ$100 billion ($70 billion) bond buying programme, prompting local banks to bring forward calls for a rate rise to as early as August, which would put New Zealand at the forefront of countries to raise interest rates.

“The RBNZ has absolutely done enough hand-waving today to tick the ‘market-prep’ box for an August hike, with CPI and labour market data set to do the rest,” said Sharon Zollner, Chief Economist at ANZ Bank.

The move comes amid nagging inflation worries globally, with U.S. inflation data rising by the most in 13 years in June, adding to uncertainty about whether such inflationary pressures are transitory.

New Zealand’s pandemic-free economy has been growing on the back of a housing boom and strong retail spending, raising concerns that it may get overheated pushing inflation above the bank’s target and squeeze the labour market.

The RBNZ noted that in the absence of further economic shocks, consumer price inflation pressure is expected to build over time due to rising domestic capacity pressures and growing labour shortages.

“Members agreed that the major downside risks of deflation and high unemployment have receded,” the RBNZ said in minutes of the meeting.

“The (Monetary Policy) Committee agreed that a ‘least regrets’ policy now implied that the significant level of monetary support in place since mid-2020 could be reduced sooner.”

A rate hike this year would make New Zealand the first developed economy to kick off policy tightening. The Reserve Bank of Australia said earlier this month that it did not expect a rate rise before 2024.

“The RBNZ has clearly changed tack to decide that the time for reducing monetary stimulus is very near. The risk of inflation and employment undershooting the objectives has switched to the risk of overshooting should the current level of stimulus remain in place,” said Nick Tuffley, Chief Economist at ASB Bank.

The RBNZ slashed its interest rate to record lows in March last year and pumped billions of dollars in stimulus as the COVID-19 pandemic raged through the country and the globe.

New Zealand, however, managed to contain the spread of the virus, with the last community case of COVID-19 reported in February, allowing the economy to bounce back faster than most others.

At its meeting in May, the RBNZ had hinted at a hike in September 2022.