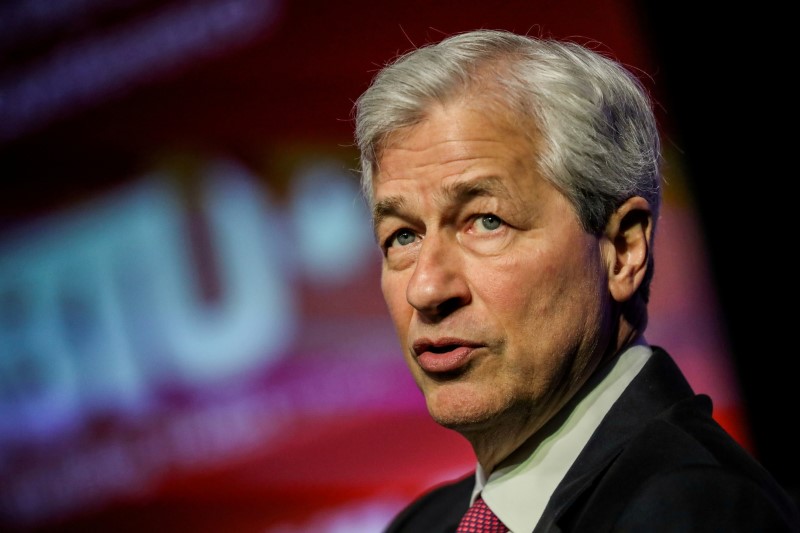 NEW YORK (Reuters) -JPMorgan Chase & Co Chief Executive Jamie Dimon said on Monday the bank is holding around $500 billion in cash, putting it in a position to benefit from higher interest rates.

“We’ve actually been effectively stockpiling more and more cash, waiting for opportunities to invest at higher rates,” Dimon said during a virtual conference held by Morgan Stanley (NYSE:). “So our balance sheet is positioned (to) benefit from rising rates.”

Dimon, who heads the largest U.S. bank by assets, said he expects rising inflation to result in higher interest rates over the next 9 months.

“I think you’re also going to have a very, very strong economy,” which will also benefit the retail bank, he said. “We try to take all that in consideration (when) we manage the balance sheet.”

The Federal Reserve is expected to make a statement on Wednesday that will indicate when the U.S. central bank is likely to begin paring back its unprecedented monetary stimulus.

Dimon also forecast that the bank’s bond and equity trading division will make $6 billion in revenues this quarter, and its investment bank may report one of its best-ever quarters.

Dimon said the investment bank is benefiting from several big deals that “may or may not close” this quarter, as well as strong client activity in equities and debt capital markets and mergers and acquisitions.

Spread the love
Previous articleU.K.’s Boris Johnson Delays End of England’s Lockdown as Cases Surge
Next articleDemian Maia calls out Nate Diaz for one last fight before retirement: ‘I would be honored’