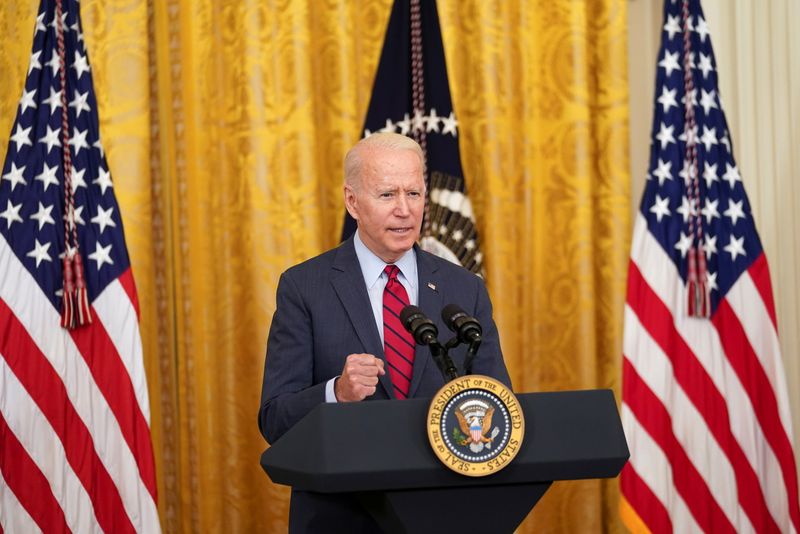 LA CROSSE, Wis. (Reuters) -U.S. President Joe Biden promoted his $1.2 trillion infrastructure package as a “generational investment” on Tuesday as he sought to pump up support for a plan that is in need of wide support in Congress to become reality.

Biden visited a public transit facility in La Crosse, a city in western Wisconsin, highlighting the plan’s investment of some $48.5 billion in public transit to reduce commute times and help reduce emissions, while boosting economic growth and wages.

In a speech, he spoke about local gains from the deal, including funds for electric buses, replacement of some 80,000 lead water lines in Milwaukee and better access to high-speed internet.

The bipartisan package also includes $109 billion in funding for roads, bridges and other major projects, including the 1,000 bridges rated structurally deficient in Wisconsin.

“This is a generational investment to modernize our infrastructure, creating millions of good-paying jobs, and position America to compete with the rest of the world in the 21st century,” said Biden.

He also noted that the plan will not hike tax on gasoline or raise taxes on Americans earning under $400,000 a year.

Vowing the plan would create jobs for middle-class people, Biden said: “This is a blue-collar blueprint to rebuild America.”

Biden is attempting to keep up the momentum for a legislative proposal that Democratic congressional leaders believe will reach a critical stage in the second half of July.

“I expect the last two weeks of July to be very busy weeks, when we will deal with the president’s proposals,” the No. 2 House Democrat, Steny Hoyer, told reporters on Tuesday.

House and Senate Democrats hope to have infrastructure legislation done and on its way to Biden’s desk by the end of September, a Democratic aide said.

Senate Democrats are aiming to pass bipartisan legislation and send it to the House, before breaking for an August recess.

Biden, under massive pressure from Republicans, on Saturday withdrew a threat to not sign the bipartisan bill unless it was accompanied by a separate package focused on what he calls “human infrastructure,” including expanded home care for the elderly and disabled.

Press secretary Jen Psaki told reporters on Monday that the White House had been in touch with Democratic leaders about the two measures but Biden had not spoken about the issue with U.S. Senate Republican leader Mitch McConnell, who wants Democrats in Congress to abandon their plan to link the two measures.

With the Senate divided 50-50 between the two parties, a move by McConnell against the bipartisan bill could cost it the 60 votes it would need to pass under Senate rules. Democrats aim to pass the companion measure through a process called reconciliation that requires a simple majority.

Psaki said Biden’s trip to Wisconsin was intended to convince Americans about the importance of both packages. He will also travel to Michigan on Saturday.